Denmark: Petition with over 50,000 signatures delivered to Russian embassy against anti-gay law 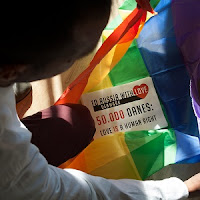 50,000 Danes signed a petition in protest against the new homophobic law in Russia, which bans the promotion of “non traditional relationships”. On Wednesday morning representatives from Amnesty’s Danish branch and To Russia with Love Denmark met with the Russian Embassy in Copenhagen and delivered the signatures. Amnesty’s campaign coordinator Helle Jacobsen. said: ”The massive support from Danes shows that we in this country have the fundamental understanding that love knows no boundaries and that everyone should be allowed to love who they want. Regardless of your sexuality, you have the same rights as everyone else. The message has been sent to President Putin of Russia together with a demand that the law should be withdrawn.”
Fahad Saeed from To Russia with Love says of the meeting: “We had a full hour with Minister Councellor Alexey Rogov. We asked if the signature make a difference. He replied: ‘Yes, it makes an impression on Putin and the government that there are protests in so many places, and that you deliver 50,000 signatures today. We live in a global world. Russia is also looking at its neighbours’”. President Vladimir Putin signed the law in June banning the promotion of “non-traditional relationships” toward minors, a move that has been criticised as part of a broader crackdown on Russia’s gay community. Other laws banning the adoption of Russian children by foreign same-sex couples, and one which enables organisations receiving funding from abroad to be fined as “foreign agents”, were also passed. Amnesty International is concerned that the law will increase the amount of hate crimes and the general discrimination against LGBTI people in Russia. The Minister Councellor said that the law is helpful in bringing LGBT issues on the agenda in Russia and that Putin has announced that he will meet with representatives of LGBT organizations in Russia. “The dialogue is in progress and we hope that the international attention – and political pressure – will change the minds of lawmakers in Russia,” said Fahad Saeed from To Russia With Love . British Foreign Secretary William Hague has spoken out against anti-gay laws in Russia to say that Britain’s foreign policy must have “a conscience”, and that it is in the nature of Britain to “stand up for human rights overseas.” The interview came a day after it was confirmed that David Cameron will raise the issue of the Russian law banning the promotion of “non-traditional relationships”, with Russian President Vladimir Putin, when he travels to St Petersburg for the G20 this week. President Barack Obama is also reportedly to meet LGBT activists in the Russian city of St Petersburg during his trip to the city as part of a G20 Heads of Government meeting. BuzzFeed made the claim citing Russian LGBT activists. Protests have taken place around the globe, including in London, as well as in Germany and Denmark, in an attempt to push G20 Government leaders to take action against anti-gay laws in Russia. Cameron’s commitment came just hours ahead of the “Love Russia, Hate Homophobia” rally at Downing Street yesterday. Along with 32 other cities across the world, the London protest calls on world leaders at the G20 summit to condemn Russia’s anti-gay laws. Out4Russia, launched last week and allows users to lobby G20 governments into action against the Russian law. Five times the number of participants than were expected took to the streets of Copenhagen two weeks ago to protest against the laws. Similar protests have taken place across the globe.